This song was performed by Stone Temple Pilots (Scott weiland, Robert DeLeo, Dean DeLeo, Eric Kretz), along with guest artist – Paul Leary (Mellotron), on their 2nd studio release “Purple″ in 1994. This album was produced and mixed by Brendan O’Brien, and engineered by Nick DiDia/Brendan O’brien. 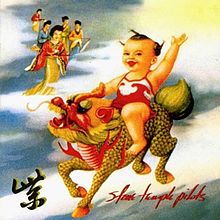 This article brings a critical analysis of the multiple aspects that make us connect emotionally to a certain song in the Alternative genre. By understanding the important elements of these highly valued performances and their emotional impact on us as listeners, we might learn what it takes to make a truly valuable musical piece.

I highly recommend reading this article while listening to your copy of the song, then watching the video on the bottom where I play the bass part with ultimate attention to the nuances of timing, articulation and dynamics in Robert DeLeo’s performance.

The song starts with a very distinctive and unique strum guitar part. What makes it unique, apart from it being strum on a high register while emphasizing the augmented 4th and major 9th chord notes, is its sound and character. It appears like the main strum guitar track is panned to the right, sent to a very short Haas effect delay that is panned to the right and sounds a little fuller and louder. The delay return is also sent to a phaser effect that creates movement on the left side. All these components create a sound that is very unique, wide and rich in movement.

The bass and guitars are driving everything forward, playing the 1/16th notes, while the drums play a syncopated kick and snare pattern that support the 1/16th note grid, with 1/8th notes movement on the Hi-hat that set an aggressive driving attitude without being too distracting.

The kick sounds wide and pretty undefined. It does have some “plasticy” high mid hattack to it, but it is not prominent most of the song (and mostly masked by the distorted guitars), but rather felt on the high bass/low mid region. It blends well with the drum kit and the bass and adds “thunder” to the track without being up front. It appears on the center of the stereo image.

The snare sounds relatively dry, wide and dark. It is full of body on the low mid region, and has a moderate amount of ringing It appears as the most prominent element of the mix. The attack of it is not exaggerated, but sufficient to cut through the mix, and it appears centered. Another interesting thing about it is that on the syncopated hits it shifts a little off center to the right. This might be as a result of panning these hits, or, more likely – these hits were played by another snare that was added to the drum kit – that is just a bit drier and thinner sounding than the main snare.

The Hi-hat sounds on the bright side but also has a good body. It is panned to the right but spread nicely throughout the stereo image, maybe as a result of a short mono reverb that it was sent to which was panned the opposite side.

The cymbals sound a bit darker than the Hi-hat, but are still relatively bright. They are spread pretty wide in the stereo image.

The toms (that are played in the verses) have good attack, body and tone, but their ringing is relatively short, and they don’t have a lot of low end. They seem to be spread pretty wide, with the floor tom (panned towards the left) sounding darker and softer than the rack toms, which seem to be both panned to the same point towards the right.

All the drums seem to have a good room space around them but it sounds very natural and not exaggerated.

The bass sounds pretty bright and overdriven. It has good low mid growl and note definition but not much low end. It is pretty much tucked in the mix and blends well with the guitars.

Why we all have to look this way
I gotta heart, I got blood, feel pain”

The guitars of the intro stop, while different brighter, modulated guitar tracks are introduced. The bass and guitars play a more open part that emphasizes the 7th chord note, while the drums play a syncopated pattern on the snare and toms, driven by 1/8th notes on the ride bell and crash. The guitars now have some kind of modulation effect to them, which creates more movement. This combination creates an atmosphere that is “washing” and driving forward, supporting the aggressive vocals.

The vocals sound pretty bright and heavily compressed. They also sound somewhat distant and tucked in the mix, with short delay and maybe a short reverb added to them.

On the 4th beat of the 4th bar, a 1/16th note snare and muted guitar fill are driving ahead to the pre chorus. The pre chorus kicks in with a tighter grove on the bass, as well as a tighter pattern on the drums, which return to 1/8th notes on the Hi-hat with no toms. It seems like 2 new double tracked guitars have been added here. They add to the drive and attitude.

“Time, time is not on my side
‘Cause the way I am
Gotta gotta now gotta find the reason why
A woman ain’t a man”

The lead vocals are now double tracked, what adds to their weird and distant mood.

Another guitar is added on the left side. It is pretty distant and plays a static note which emphasizes the 4th chord note of the first chord. It lands on the 2nd and 4th upbeats of each bar. Because of the somewhat dissonant chord progression, it adds more dissonance, emphasizing the major 6th, major 9th and 5th of the next chords it lands upon.

Why we all have to look this way
I gotta heart, I got blood, feel pain”

This verse is pretty much a repetition of the first verse. Notice the heavy compression on the vocals, that due to its relatively slow attack, do not tame down but rather exaggerate the transient in the beginning of the sentence “I gotta heart, I got blood, feel pain”. It is certainly a mixing imperfection as it should have been taken care of with automation or a peak limiter, but it adds aggression, character and excitement to the song.

This is also a repetition of the 1st chorus, but with the dissonant added left guitar more prominent in the mix. Notice that on the second half of the chorus it becomes weirder sounding and changes from high G to lower B. This adds even more dissonance, preparing for the instrumental.

The dissonant chord progression of the instrumental part is emphasized by the added left guitar that now sounds heavily distorted, thin and filtered.

After 3 bars, all instruments play a long fading out D chord, except the bass, that now melodically supports the intro strum guitar part that is being introduced back. The drums play 1/4 notes aggressively on the ride bell, while being faded out manually – with a fader down movement. All instruments slow down in tempo roughly to the tempo of the intro.

Another part that melodically supports the strum guitar is a dark sounding Mellotron that is panned off center to the right. It plays long notes with melodic movement.

Kicking us into the next guitar solo section is an aggressive 1 bar drum fill. Notice that again it breaks the easy, slower tempo of the strum guitar/Mellotron part – kicking us back to the tempo of the song. This drum fill is also made louder and bigger, as a result of cranking up the room mics and even the individual mics. Notice how at the beginning of the solo the drums go back to the back of the mix, supporting the other instruments.

All instruments play the intro part aggressively, while the heavily distorted/fuzzed mid range oriented solo guitar is introduced. This guitar is also rich in low mid and sounds relatively dark, dry and close. It appears on the extreme right of the stereo image.

After 8 bars, all instruments play the instrumental dissonant chord progression, while the solo guitar play 1 bar answers on the D chord, first on the right with the original solo guitar, and then on the left with the thin sounding guitar.

Why we all have to think this way
I gotta heart, I got blood, feel pain”

All instruments play the last verse with ultimate attitude, Then move to the extremely aggressive outro part.

All instruments play a syncopated repetitive A chord, rhythmically supporting the vocals that repeat the first and third sentence of the verse, Then all instruments and the vocals end the song on a dissonant note, playing a D# long sustaining chord.

Feel free to let me know what you think, and if you liked it, don’t hesitate to share…

For personal inquiries, questions or suggestions, please contact me via E-mail: theshtikfactory@gmail.com